As fears of a 2023 recession grow, more investor scrutiny is being applied to the consumer finance sector. The COVID-19 pandemic provided lots of support for struggling consumers. However, these support mechanisms are expiring, and it looks like delinquencies are rising. What does this mean for Ally Financial (ALLY 0.37%)?

Ally is one of the biggest auto lenders in the U.S.

Ally Financial (formerly known as the General Motors Acceptance Corp., or GMAC) is one of the biggest auto lenders in the United States. It also has Ally Bank, which is a digital depository insured by the FDIC. Ally offers mortgage lending, corporate finance, personal lending, insurance, and investment services as well.

Delinquencies are rising, but keep a historical perspective

The Consumer Financial Protection Bureau (CFPB) keeps track of auto loan delinquencies, and they were on the rise in 2022. This is across all percentiles, though it is most pronounced for the lowest credit scores. That said, delinquencies in 2020 and 2021 were abnormally low thanks to stimulus payments and because of servicers’ willingness to modify loans for borrowers who got into trouble.

To put the current delinquency rates into perspective, the rates are still much lower than they were in 2019. So while the year-over-year increases in delinquencies may appear to be alarming, historically they are still quite low. The CFPB is concerned that dealers have been using longer loan terms to make monthly payments more affordable, but auto loans are almost always “underwater” due to the fact that vehicles generally depreciate over time. Extended loan terms of 72 or 84 months exacerbate this phenomenon.

Auto credit outstanding has been expanding, though much of this is due to cars becoming more expensive. This was especially pronounced during the pandemic, when used car prices were rising (unusual for a depreciating asset), but it was also due to supply chain issues and general increases in the costs of labor and materials.

Ally stock has been beaten up this year as the Federal Reserve increased rates to combat inflation. It is trading at a super-low price-to-earnings (P/E) ratio based on expected earnings this year. That said, earnings are expected to decline next year as credit losses are likely to increase. 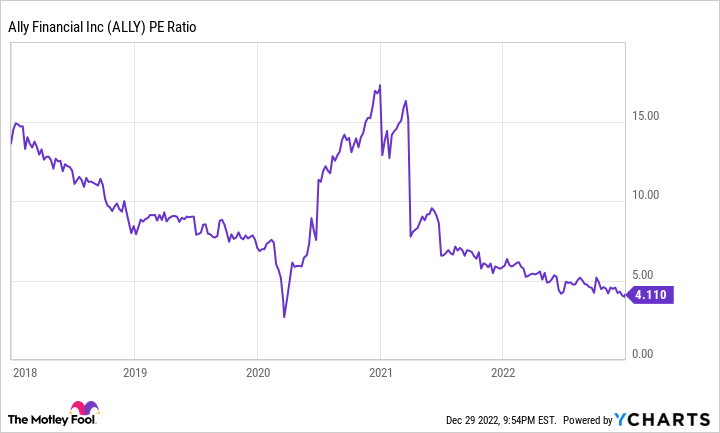 Wall Street analysts see Ally earning $5.99 per share in 2022, though earnings are expected to fall to $4.29 per share in 2023. This would put the company on a multiple of 5.7 times expected 2023 earnings per share, which is still a pretty cheap multiple, historically. Note that the big spike in the P/E ratio during 2020 was due to the financial sector taking big provisions for credit losses due to the introduction of the Current Expected Credit Loss (CECL) framework and uncertainty over the impact of the pandemic.

Warren Buffett’s Berkshire Hathaway is a holder of Ally Financial in its portfolio. It fits the Buffett model of a solid business at a reasonable price. Ally also pays a decent quarterly dividend of $0.30 per share, which gives the stock a yield of 5%. The company has also been hiking its dividend over the past several years. Given that Ally is expected to earn $4.29 per share next year, the dividend is well covered. The bottom line is that Ally is historically pretty cheap, and any increases in delinquencies should be looked at from a historical perspective.

The Brink's Company: When Your Business Is Money (NYSE:BCO)

Tue Jan 3 , 2023
Maksym Kapliuk Although it seems as though more and more of our daily transactions occurred digitally, the actual physical use of cash, it’s still quite prevalent, not only in the US, but across the globe. Given the very nature of cash, with how easy it is to steal, valuable services […] 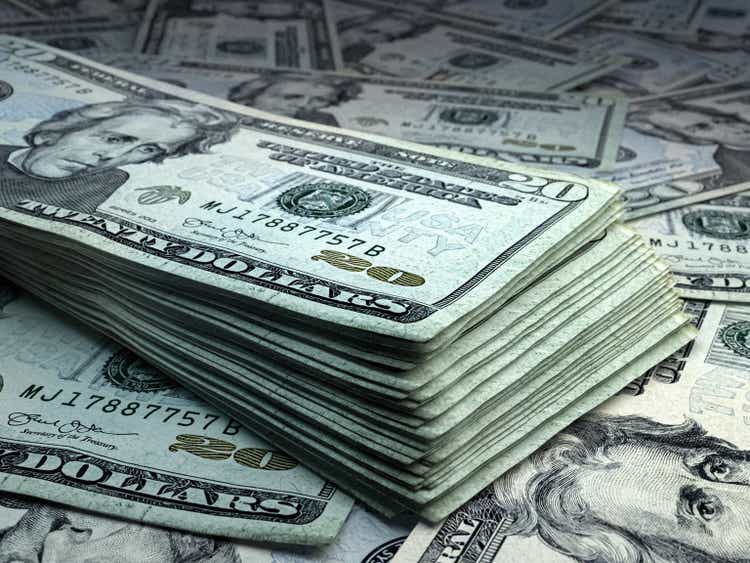