The single most important factor influencing Wall Street these days is the economy. Market watchers have been scouring economic data for clues as to where things might be heading and how the major market indexes will react in response.

After a check of all the usual sources — press releases, filings with the Securities and Exchange Commission, and changes to analysts’ sentiment — there was very little company-specific news driving Apple, Roku, and Shopify stocks lower (more on that in a moment). This suggests that Wall Street is reacting to the latest economic data and didn’t like what it revealed.

The news came courtesy of the U.S. Bureau of Economic Analysis, which provided an updated read on the state of the economy, showing that third-quarter growth was stronger than previously reported. The data revealed that gross domestic product (GDP) growth climbed at 3.2% year over year, up from two previous estimates of 2.9% and 2.6%.

This came after declines of 1.6% and 0.6%, respectively, in the first and second quarters. This meets the most common shorthand for a recession, which is marked by two successive quarters of declining GDP.

Investors bemoaned the news, as it suggests that the Federal Reserve will be forced to keep its foot on the gas pedal in terms of interest rate hikes, the central bank’s most important inflation-fighting tool. Economic theory suggests that higher interest rates — which make borrowing more expensive — causes consumers and businesses to cut back on spending. This slows demand, sending prices downward.

At least, that’s how it works in theory. The Fed has raised interest rates seven time so far in 2022, yet inflation remains historically high. This suggests the Fed will continue to increase rates for the foreseeable future, which makes the cost of living more expensive.

The central bank has to exercise care, however, as slowing the economy too quickly could result in a recession. Unfortunately, there’s a very fine line between cooling an overheated economy and forcing a recession, as the Fed is well aware.

So what does this have to do with our trio of consumer-facing technology companies?

There was one bit of company-specific news that may have helped fuel Apple’s decline: Needham analyst Laura Martin reduced her 2023 profit target on Apple. The analyst now expects the company to generate earnings per share of $6.07, down from $6.34, as the macroeconomy will fuel weakening consumer demand, exacerbated by ongoing supply chain shortages and growing geopolitical tensions between the U.S. and China.

If there’s a silver lining to the economic cloudiness, it’s that each bear market has been followed by a raging bull market — which means that investors who buy high-quality stocks now will be amply rewarded when the economy resumes its upward trajectory and the major market indexes follow suit.

Furthermore, the stock price declines of the past year have resulted in historically low valuations. Shopify, Apple, and Roku are currently trading for 6 times, 5 times, and 2 times next year’s sales, when a reasonable price-to-sales ratio is between 1 and 2. That makes Roku stock the least expensive in terms of traditional metrics. That said, investors typically reward premium valuations to companies with strong future growth prospects, and Apple and Shopify certainly meet that criteria.

All this is not to say the market — and these three stocks — won’t fall further; they likely will. But calling a bottom is hard, and investors who can withstand the current stomach-churning volatility will most likely be rewarded three to five years down the road if they buy these top-notch companies at discounted prices.

Sun Dec 25 , 2022
WASHINGTON, D.C. – The Consumer Financial Protection Bureau (CFPB) is ordering Wells Fargo Bank to pay more than $2 billion in redress to consumers and a $1.7 billion civil penalty for legal violations across several of its largest product lines. The bank’s illegal conduct led to billions of dollars in […] 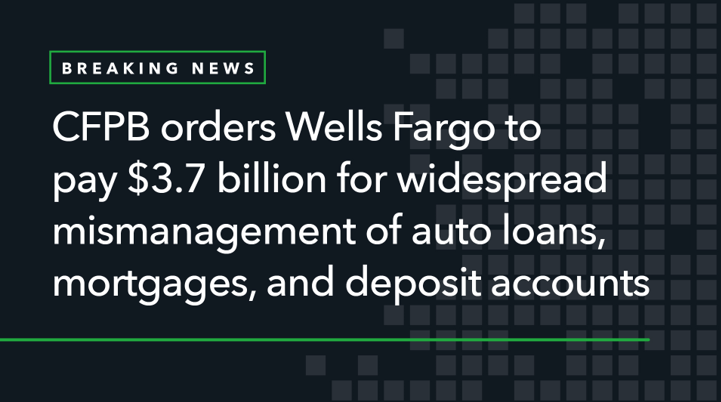