Skip to content
Written by Michael Lewis on December 27, 2022

Hail the guts and creativity of those who start businesses – which are almost entirely small businesses, our economic backbone. Despite the media spotlight on billionaire moguls like Elon Musk, where would we be without small startups?

As Miami Today focuses this week on small business, the notable fact is that small business is actually very big business – the Small Business Administration categorizes a whopping 99.9% of all US businesses as small, 33.2 million of them.

Small businesses cover a broad range. The Internal Revenue Service defines them as having under $10 million annual revenue. The Small Business Administration says they can have up to 500 employees and a maximum of $41.5 million in annual receipts – a sum that varies by industry and can be as low as $8 million in a full-service restaurant or real estate office and up to $12 million in a law firm, but the full $41.5 million in a clothing store.

We rightly glorify glittering tech startups, but startups cover a very broad range – you name a business type and it’s hard to think of one (other than a public utility) that isn’t represented. Some aim for headline-worthy rapid growth while run-of-mill enterprises grind it out more slowly.

Of course, many businesses aspire to be big, and most will never achieve that – in fact, a large share of small businesses are always on life support. But then, even giants like FTX can crumble from multi-billion empires to bankruptcy in a single week. And the only thing cryptocurrency player FTX created is chaos, not lasting jobs. The word “player” was fitting.

Startup operators are to be admired not just for courage in undertaking an enterprise with all its perils but for their cumulative job-creating power. Florida in that regard leads the nation by far.

More locally, new business applications grew each year in Miami-Dade County from 2009 through 2021, which isn’t surprising. What is startling is a huge spurt during the pandemic. 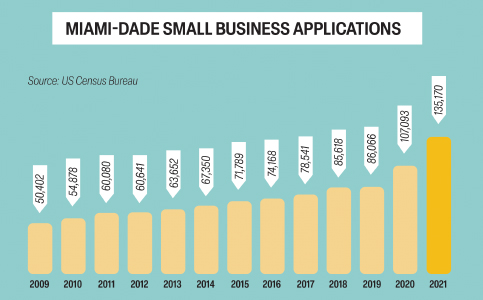 Entrepreneurship being an uncertain road filled with obstacles, business tax applications always exceed the number of businesses that ever open. A report this month from the Census Bureau on applications and actual business formations notes that in November business applications in the US totaled 418,905, but the bureau estimates based on track records that only a third of them, 138,420, have a high propensity for actually opening.

Closer to home, the bureau projects that 12,089 of those business openings within a year will be in the South. Stretching it to two years from now, the total from that application group is projected to grow to 15,393. National total projections are 30,598 within a year, 39,020 within two years – so just more than 9% of the total applicants are expected to be up and running within two years, illustrating the difficult path for entrepreneurs.

In 2021, as the Census Bureau unveiled data showing the 2020 spike in business applicants in Miami-Dade County, we speculated on the cause of the sudden growth: was it resilience in the face of the pandemic, creativity, an entrepreneurial spirit, necessity as many employers closed temporarily during the pandemic, or members of the underground economy surfacing and applying for formal tax identifications?

“All of the above,” said Professor Jerry Haar of Florida International University’s College of Business, who cited the importance of differentiating those who felt they had to start earning a living to survive from those trying to start businesses because they saw market opportunities.

Miami-Dade unemployment since has tumbled to one of the nation’s lowest at 1.5%, far better than the state’s 2.6% and the nation’s 3.7%. Whether those applying for business tax IDs saw a realistic market opportunity or have misread their chance of success, it seems likely that startups are seeking far more than mere economic survival. The level of entrepreneurial spirit can be debated but, for the risk averse, far better income opportunities exist than walking through the mine field of creating and then running a business.

Small businesses can get an SBA helping hand ranging from microloans that average $13,000 and max out at $50,000 for startups to $5 million for other types. Small businesses can leverage these loans – which are not from the government but from financial institutions – as well as contract advantages to compete in the market. Local governments also offer contract set asides for small firms.

Any entrepreneur, however, can attest to the perils of business. As the largest job creator in Miami-Dade, therefore, small business merits recognition for building from the ground up.

As the county looks to replace the ultra-embarrassing logo on its basketball arena, it could fittingly replace the FTX hucksters with the Small Business Arena hoopsters.

Fri Dec 30 , 2022
In this edition of Ask General Counsel, General Counsel, PC, a law firm in McLean that since 2004 has been representing businesses, nonprofit entities and individuals throughout the Washington area, discusses the importance of having a contract management solution – and offers its clients a solution for free. What is […]